The Loudoun Adult Detention Center houses maximum, medium, and minimum security level inmates. Some inmates may find themselves housed at the facility for up to three years before being delivered to the State Department of Corrections.

Often inmates will receive a stay of delivery to the Department of Corrections because of appeals. Local inmates receiving 12 months or less will serve their sentence at the Loudoun Adult Detention Center. 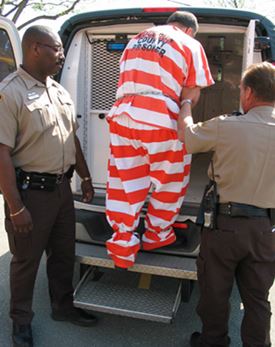 The inmates at the facility pay $12 per day for staying at the facility and those in the work release program are released each day to go to and from their jobs with stringent rules and regulations. The money they make helps pay their fines, courts costs, make restitution to victims and support their family. This also eases the burden of financial support to the taxpayer.

Also housed at the Work Release Facility is the Sheriff's Inmate Work Force. This group of inmates is also non-violent minimum custody level inmates. They work in the community under an armed deputy and perform landscaping, trash pickup along roadways, parks, and waterways, minor construction, painting and other numerous tasks. They work on State, County and Town property as well as on property of charitable organizations.

The inmates are credited $5 per hour that goes directly to paying fines and court costs. Each year this group saves the county and municipalities within the county, thousands of dollars in the work they perform.

The equipment used by the Sheriff's Inmate Work Force such as mowers, weed eaters, etc. is purchased from the inmate canteen fund. This fund receives no tax money and is supported by the inmates' purchases and telephone dividends. This group has, for several years now, performed snow removal from county facilities, mowed areas that used to be under commercial contract, and has received a grant to buy a commercial power washer to aid in the removal of unsightly graffiti.

Loudoun County is also a partner in the Peumansend Creek Regional Jail located in Caroline County, Virginia, on Fort. A.P. Hill property. Arlington County, Caroline County, Prince William County, The Cities of Alexandria and Richmond also make up the authority of the jail. Peumansend Creek Regional Jail is a 330-bed minimum-security facility that is very program oriented and serves as an excellent facility to prepare inmates for reintroduction into society.

The Loudoun County Sheriff’s Office (LCSO) has a zero-tolerance policy for sexual abuse and harassment and makes prevention a top priority. The Prison Rape Elimination Act of 2003 is a federal law that seeks to eliminate sexual abuse and harassment. This law applies to all federal and state prisons, jails, police lock-ups, private facilities, juvenile facilities, and community correctional settings.

The New standards were published in May 2012 and LCSO is currently enhancing its effort towards implementation of the standards. The LCSO policies prohibit any form of sexual activity, including sexual harassment. Forced or coerced sexual behavior is a criminal offense and LCSO will take every action possible to hold perpetrators accountable, including prosecution resulting in additional time in prison. It is against the law for staff to engage in any type of sexual activity with an inmate.

By law, an incarcerated person is unable to legally consent to sexual activity of any kind with a staff member. This type of activity is referred to as Staff Sexual Misconduct and is punishable up to and including loss of employment, civil suit, and/or imprisonment. Any reports of such incidents will be investigated thoroughly by the Loudoun County Sheriff’s Office, and the employee will be held accountable if found guilty.

Inmates who are currently being sexually abused or harassed are encouraged to talk to a staff member. This will allow for the quickest response. Inmates receive information on how to report sexual abuse and harassment through inmate orientation, posters, handbooks, and ongoing communication. Inmates may report in person, through the PREA hotline number, or through the grievance system.