Loudoun County's nomination for expansion of the Ball's Bluff Battlefield National Historic Landmark was approved by the U.S. Department of the Interior. Secretary of the Interior Sally Jewell announced the expansion of the Civil War landmark from its current 76 acres near Leesburg to include over 3,300 acres of riverfront land on both sides of the Potomac River and including Harrison Island, Maryland.

Approval of the expansion marks the successful culmination of a long-term project spearheaded by the Loudoun County Heritage Commission as directed by the Board of Supervisors. The original designation included only the land on which the final and most intense fighting took place and the steep bluffs that Union troops moved down as they tried to flee. The expanded Ball's Bluff National Historic Landmark now includes: 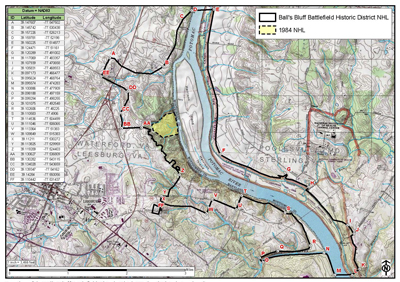 National historic landmarks are nationally significant historic places designated by the Secretary of the Interior because they possess exceptional value or quality in illustrating or interpreting the heritage of the United States. They do not reduce the rights of any property owners within the landmark boundaries. About 2,500 historic places across the United States bear this distinction. In addition to the Ball's Bluff Battlefield and National Cemetery, four other Loudoun properties are national historic landmarks; Oak Hill, Oatlands, the George Marshall House and the Village of Waterford.

The Loudoun County Heritage Commission sought to honor the land near Balls Bluff where Federal and Confederate soldiers fought in October of 1861 by proposing expansion of the National Historic Landmark  to include approximately 2,900 acres over which both sides ranged during this struggle. The commission completed a Preliminary Information Form (PIF) (PDF) which describes the significance of the battle in the context of the landscape today. 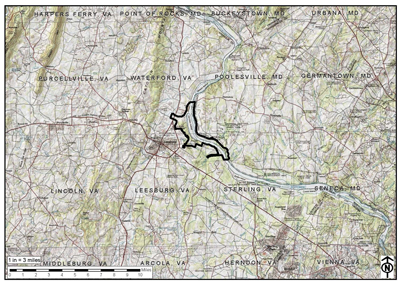 In late October of 1861, a small scouting party of Federal troops crossed the Potomac River seeking information about Confederate camps near Leesburg. Through a series of errors and mistakes, this small scouting mission developed into a serious battle in which many hundreds of soldiers were wounded, captured or died. The losses were particularly dire for the Federal side, which was unable to retreat across the swollen Potomac. A U.S. Senator, Edward Baker, was killed in the battle. The U.S. Congress, reacting to the disastrous outcome so close to Washington, D.C., established the Joint Committee on the Conduct of the War which significantly affected the entire course of the terrible war.

The original 76-acre National Historic Landmark at Balls Bluff contained a small National Cemetery and was the site of the last and worst of the fighting. However, significant events occurred over a much wider area that day in October ranging from Edwards Ferry - where thousands of Federal troops crossed over from Maryland but never managed to come to the aid of their beleaguered colleagues so close by to Whites Ferry, where thousands of Federal troops were camped on the Maryland side. It also includes land on the Maryland side of the Potomac along the Chesapeake and Ohio Canal and Harrison's Island from which the Federal troops crossed and to which they tried desperately to return. Much of this land, on both sides of the river, looks just as it did 152 years ago.

For more information about the expansion, email the Department of Planning and Zoning or call 703-777-0246.